Something I’m finding I have to get used to very quickly here is the expense of everything. Before I moved out, people would constantly bring up the fact that Cayman is a tax haven – how I would be so much better off financially with a significantly larger income than I was receiving in UK.

Unfortunately the reality is not quite so sunny, in that though we don’t have income tax here we do have to pay for mandatory medical insurance and pension contributions from our income. In addition the cost of living here is ridiculously high – higher than even London or New York. The currency is Cayman Island $, and at the time of writing the exchange rate to the £ is awful (thank you, Brexit) – £0.94 to CI$1.

Take my living situation as a starter. I rent a room living with a family in a 2 bed condo on Seven Mile Beach (admittedly one of the more popular and therefore expensive areas) – this sets me back just short of CI$1000 per month, which I have been told is average to cheap considering location and inclusivity of bills.

Despite the island only being 22 miles long, it is exceptionally difficult to walk anywhere due to the lack of pedestrianisation, but also the day-to-day heat and humidity. Therefore a car is a must here. I couldn’t afford to buy one second-hand outright when I first got here (half-decent ones that won’t break down in the first 6 months start at about CI$3000) so I decided to lease for 6 months whilst I save up for my own car. The cheapest lease that included maintenance and insurance I could find was for a 6 year old Mazda 3, for a cool CI$600 a month.

Already half of my monthly earnings are gone once these bills go out, so what about food?

Being a small island with virtually no exports, almost everything here is imported. This is both a great thing and a terrible thing; great because of the immense variety of food you can get here – I’ve never seen so many American, British and Caribbean products side by side in one place before. The massive amount of imports is equally terrible though because import duty is passed on to customers and results in massive mark ups on the majority of items. It’s particularly depressing to see packets of things like Birds Eye fish fingers with British price stickers still fixed onto them, next to a Cayman supermarket price tag of at least 4 times more. 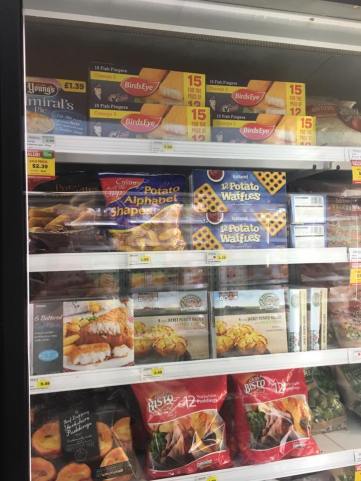 To give you more of an idea, below is a list from Expatian.com of a current average of supermarket prices for basic items – without splashing out on the big brand imported goods.

This was quite shocking to me the first time I went to do a food shop and spent over CI$100 on things that would cost less than £40 in the UK, so if I want to save any money at all whilst I’m here, significant lifestyle adjustments need to be made, not least cutting down on the amount of take-aways and eating out I do. From a health point of view this can only be a good thing.

Clothes too are a difficult thing to navigate – many shops seem to be stuck in an 80’s time warp and only stock touristy clothing that wouldn’t look out of place in Caddyshack or Weekend at Bernie’s. Anything that you would actually consider wearing in a public setting carries a hefty designer price tag – for example a nice dress from a high street store in Camana Bay would set you back an average of CI$77! I’m just going to stock up on clothes when I fly back to the UK at Christmas.

I’m just glad I haven’t got a young family, as if you want to send your child to a decent school it will cost you too, starting in the region of CI$1000 per term per child. No wonder they are strict here with their immigration policies, with all residents needing to have jobs secured before moving, or have proof of enough savings to be able to support themselves. (I’m not sure on the figure but have read you need somewhere in the region of CI$500k in savings to not require a work permit)

So to sum up, the tax-haven status Cayman has sounds like a dream from the outside, but the reality is depressingly expensive. Living in paradise certainly has a price tag – but what that has shown me is that my lifestyle just needs adjusting. My definition of living “comfortably” at home has had a reality check since being here, but I honestly do think when I get used to it I will love it.

Missing you, England, and your reasonable prices. Send toffee crisps. They don’t seem to import those here.

Letters to England – The Adventures of a British Expat

Travelling is amazing, and sometimes you really want to write home about things. These letters are to document my experiences and adventures travelling this curious blue-and-green planet of ours. And of course to let my mum know I'm okay.
%d bloggers like this: